Hello everyone! I hope everyone had a nice calm weekend because this week were going to pick up the pace! Its action week so hold on to your books because this week is full of adventure and most importantly action. When I think of action I think of Tom Cruise movies and people going on the crazy adventure so this week I’m happy to recommend and later review four amazing action books! The contestants this week are:

‘Not If I save You First’ by Ally Carter

Maddie thought she and Logan would be friends forever. But when your dad is a Secret Service agent and your best friend is the president’s son, sometimes life has other plans. Before she knows it, Maddie’s dad is dragging her to a cabin in the middle of the Alaskan wilderness.

No phone.
No Internet.
And not a single word from Logan.

But before that can happen, an assailant appears out of nowhere, knocking Maddie off a cliff and dragging Logan to some unknown fate. Maddie knows she could turn back- and get help. But the weather is turning and the terrain will only get more treacherous, the animals more deadly.

Maddie still really wants to kill Logan.
But she has to save him first.

‘Six of Crows’ by Leigh Burdugo

Ketterdam: a bustling hub of international trade where anything can be had for the right price–and no one knows that better than criminal prodigy Kaz Brekker. Kaz is offered a chance at a deadly heist that could make him rich beyond his wildest dreams. But he can’t pull it off alone…

A convict with a thirst for revenge.

A sharpshooter who can’t walk away from a wager.

A runaway with a privileged past.

A spy known as the Wraith.

A Heartrender using her magic to survive the slums.

A thief with a gift for unlikely escapes.

Six dangerous outcasts. One impossible heist. Kaz’s crew is the only thing that might stand between the world and destruction—if they don’t kill each other first.

What happened in August of 1997, in Paris was just the tip of the iceberg for the British Secret Service. Embrace yourself to discover the reason behind Operation White Diamond…

Jessica Cardelini wasn’t your typical suburbanite. Majoring in Cryptology, she was used to puzzles; however, the biggest puzzle she would face would be her past. After the murder of her Uncle, her life went into disarray. Finding herself in a tug-of-war between the F.B.I and unknown forces, she turns to the only help available, Professor Patrick Robinson. Together they traverse through D.C. looking for what her Uncle left behind…The Imperfect Plan.

‘The Raven Boys’ by Maggie Stiefvater 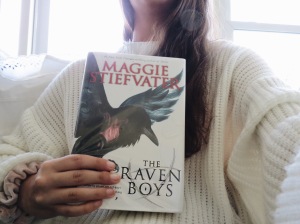 “There are only two reasons a non-seer would see a spirit on St. Mark’s Eve,” Neeve said. “Either you’re his true love . . . or you killed him.”

It is freezing in the churchyard, even before the dead arrive.

Every year, Blue Sargent stands next to her clairvoyant mother as the soon-to-be dead walk past. Blue herself never sees them—not until this year, when a boy emerges from the dark and speaks directly to her.

His name is Gansey, and Blue soon discovers that he is a rich student at Aglionby, the local private school. Blue has a policy of staying away from Aglionby boys. Known as Raven Boys, they can only mean trouble.

But Blue is drawn to Gansey, in a way she can’t entirely explain. He has it all—family money, good looks, devoted friends—but he’s looking for much more than that. He is on a quest that has encompassed three other Raven Boys: Adam, the scholarship student who resents all the privilege around him; Ronan, the fierce soul who ranges from anger to despair; and Noah, the taciturn watcher of the four, who notices many things but says very little.

For as long as she can remember, Blue has been warned that she will cause her true love to die. She never thought this would be a problem. But now, as her life becomes caught up in the strange and sinister world of the Raven Boys, she’s not so sure anymore.

From Maggie Stiefvater, the bestselling and acclaimed author of the Shiver trilogy and The Scorpio Races, comes a spellbinding new series where the inevitability of death and the nature of love lead us to a place we’ve never been before.

Make sure to subscribe to find out which books will be kicked off first and most importantly who will survive this crazy competition!